Fathers, uncles, male mentors, grandfathers, brothers, and community leaders recently gathered at the Café at Chicago Vocational Career Academy in Chicago, IL to share what men can do to increase their involvement and support in the lives of their children—especially their education.

The Department of Education (ED) was honored to sponsor the event alongside other federal agencies such as the Department of Health and Human Services as well as father serving organizations such as Black Star Project, Watch D.O.G.S., the Illinois Fatherhood Initiative and Real Men Charities. 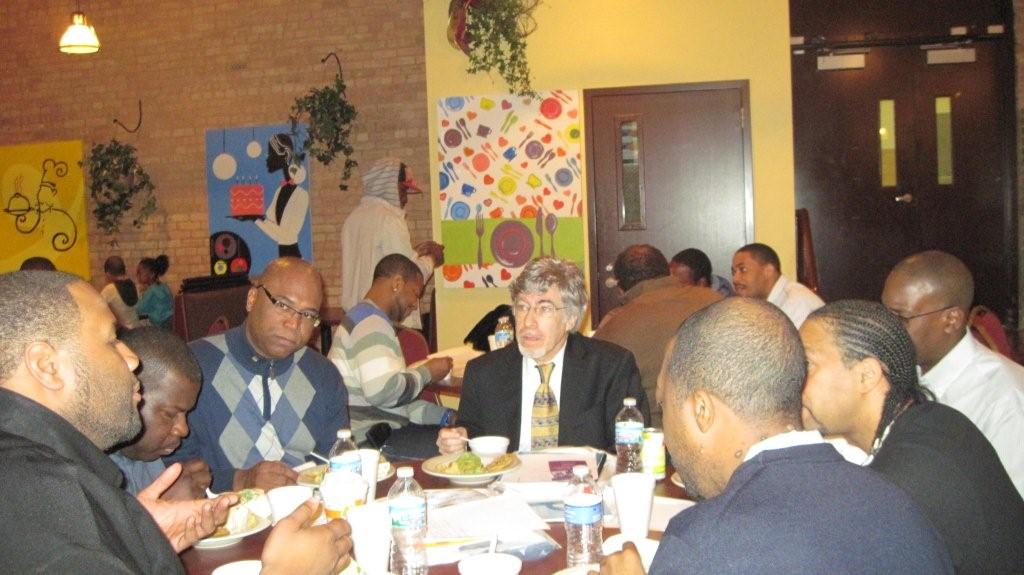 Participants at the Roundtable, Café at Chicago Vocational Career Academy in Chicago, IL

Approximately 45 men attended from multiple ethnic and cultural backgrounds. A panel of fathers and experts shared their experiences and research that affirmed the positive role of fathers in the lives of their children. Panelist Dexter Chaney, one of ED's Teaching Ambassador Fellows and a Chicago assistant principal, explained a principal's perspective on parental involvement. In his remarks, he linked parental involvement to ED's efforts to motivate parents to be partners in their children's learning. Other panelist included

One young father, in his late teens, said the message should be "taken to the street." He shared his feelings of isolation without a job and family supports. The group challenged this young man to return with his friends to a follow-up meeting. Attendees also challenged each other to go to their neighbors and friends encouraging them to become involved.

As a result of this session, monthly meetings will be held to continue the dialogue. A larger Fathers Forum is scheduled for May 5, 2012 at Odgen School in Chicago, IL.

Shirley Jones serves within the Department of Education Office of Communications and Outreach for the Great Lakes Region.